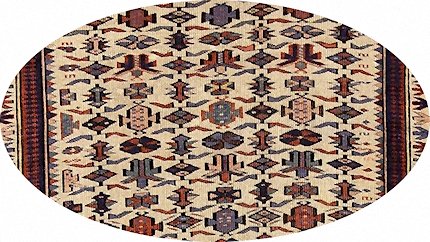 is a town between Isfahan and Shiraz, home of Qashqai’s stable nuclei. The geometric designs are very minute, usually on a red background, of which the best known is HEBATLU, very similar to that of the Yalameh, the Qashqai and Kashkuli

In Persian it means blue

Are streaks or colour variations of the fleece usually in horizontal bands. It usually happens when using wool from different baths of the same dye, or in which the colour had not set in the same way and thus does not have the same stability. At first that is from the moment you are knotting the carpet there are no differences, but over the years, you can get to rather remarkable shade variations. The presence of Abrash in a carpet does not substantially change its value and this evaluation is prevalent nowadays. In some Rugs it even improves its aesthetic effect and charm and it reinforces its authenticity. In the current carpet production fake Abrash are made on purpose to create the effect of ancient Rugs; obviously an eye which is a bit “trained” can see that they are not natural. Interesting Abrash examples can be found in Kuba Perepedil Antico 58991 where you see, in the header, an area with red knots and in the Bakshaish Antico 72600 in which the Abrash present give the carpet a greater charm.

Modern production Adana Rugs are hand knotted in Turkey, with coloured ice inlaids. They are very beautiful and knotted precisely in wool and viscose in the clear part, in order to get the silk’s sheen. The chromatic effect and resistance are excellent. They are rugs that have a particular strength because, and this is something very important, they are not tufted Rugs and, therefore, to make them no glues or silicones of any kind are used on the reverse. See the Adana catalogue.

When in a kilim other wefts are passed in order to create a particular design one talks of added wefts technique, in practice a kilim fabric becomes a Soumak.

In German it means eagle and so Caucasian Rugs of Armenian origin with stylized medallions reminiscent of the ancient heraldic eagles are called Adler Kazak.

are hand-knotted Rugs from the Turkoman people living to the north of Afghanistan and sometimes in Pakistan. The colours are usually quite dark in all shades of red, brick-red, yellow, black. They use rather coarse wool, and therefore greasy, very often goat wool and pure horsehair. The subjects of the Afghan Rugs, in the past also quite beautiful especially the small size prayers rugs, can be divided into two: Aqche and Khal Mohammadi. Afghan Aqche has the classic subject with Turkoman goals across the large or small octagonal. Among the new productions, silk is also rather used both for the frame and for the pile. The oldest specimens are virtually extinct and much sought after by amateur collectors. Some Afghan Rugs in the catalogue.

they are semi-nomadic Turkoman tribes originally from Azerbaijan deported in the sixteenth century to the region between Kirman and Shiraz. They live in tents or in simple primitive clay huts. The most beautiful Afshar Rugs are rather fine, light and soft. The weave is passed after each row of knots (two for Kutlu), they are knotted with wool dyed with natural colors and symmetrical Ghiordes knot. Afshar artifacts in the catalogue.

are fabrics woven by the Turkoman tribes deported from Azerbaijan in the sixteenth century in the region between Kirman and Shiraz. These are old manufacture Afshar Kilim

Old Two pocket bags used as containers by nomads and can be of various sizes depending on the use to which they are intended. Here’s an old manufacture Afshar Korjin.

Carpet of Indian origin which, in the ancient productions between the sixteenth and eighteenth century like other artifacts of Mughul India, reflects the components of that original fusion that arose from the complex cultural encounter between the Indian and the Muslim world. In the most recent production quality seems quite different from that of the past and the predominant colours in the field are dark red, blue and ivory. The reasons are purely floral, inspired by the ancient Persian Rugs.

So called are prayer rugs in the Turkish language, see the magnificent tappeto Panderma dell’800.
Aina-Gotschak:  Motif frequently used on Turkoman Joval and Peat: the field is composed of minute panels decorated with hooked Gotschak motifs.

The term « gul » literally means « mirror-like ». The Rugs with this design are formed by small gul inscribed into rectangular spaces recurring in lesser productions of Turkoman tribes.

Container that can be defined as the mirror’s frame, in Turkoman production, made of fabric  knotted in a particular way. Aina would be the proper mirror.

It can be considered the prototype of the Berber carpet, in the presence of all the characteristic symbols of this people (the lozenge, the cross, the plants). The color of the field makes it elegant and understated compared with the disruptive power of symbolism.

Typical artifact of the region of the same name in the High Atlas, in southern Morocco. The design’s symmetry, the yellow as dominant colour and the natural yellow, green and red colours identify the Rugs coming from this region. Some older specimens of Ait Tamassin

Decorative motif frequently found in the field of Turkoman Joval and Peat similar to aina-gotschak.

The extra borders on the heads of Turkoman Rugs are so called; they can be knotted or in kilim and/or decorated with sumak embroidery. They are also depicted in minarets and mosques, widespread in Turkey, often reproduced schematically at the apex of the Rugs’ Mihrab. See the ancient Bukhara, for example.

We find it frequently in prayer rugs. It is an ancient oriental prosperity and fertility symbol.  It is interpreted frequently as a symbol of the axis of the world, because it connects the three cosmic levels that make up the universe: underground, terrestrial and celestial. For its rich symbolic meaning it therefore appears often in prayer rugs, in more or less stylized interpretations. You can see some examples of the tree of life  in these Rugs: Saruk Farahan W. Legends, Kashkuli Antico.

Used to indicate a particular Scirvan Kuba chi-chi group, and it means “chi-chi with plum-tree blossom”

Double sulphate of potassium and aluminum, it is used as a mordant in wool dyeing.

He was a great  Mashad end ‘800 master weaver, whose Rugs, frequently signed, are distinguished from other Khorasan specimens by the use of selvedge in blue.

To  generically define kilims made in Turkey. See some kilim in the collection gb-Rugs.com

Aromatic amine at the base of the synthesis of synthetic dyes, used in the mid-nineteenth century. Magenta and mauveina are the best known. Being quite cheap and easy to use they were much used in dyeing carpet wool. People soon realized their instability to light and washing and for these reasons the producing countries’ authorities forbade their use. The measures were of little effect, but they were replaced anyway, almost immediately, by better quality colorants which in the meantime had come onto the market.

Action by which one creates the fleece in Rugs. The term is often used in lieu of weaving and indicates the procedure, in carpet production, with which the weaver creates the carpet knotting the wool yarn around the warps. In the  previous GLOSSARY OF CARPET page there are some pictures of the  women weavers of Azerbaijan at the frame  knotting a rather large  carpet

Stylized floral motifs that reproduce themselves indefinitely. Some examples of Rugs in arabesque subjects are these: the Saruk Farahan Ancients 73644 and 58616, the 58111 Tabriz Ancient and Old Lilian 56208, and in the newly manufactured Rugs the Kum silk 46090, whereas in the designer Rugs Yamta the 80 line Nepal 67957