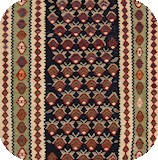 Baften is a verb, which means to knot in Farsi (Iran). It is used as a suffix to indicate the Rugs origin or analogy: bibibaff, sennehbaff, armenibaff, Sennehbaft. Sometimes, it is used associated to different origins. For example Sench baft means fabric as Seneh, Baft-E-Seneh means cloth from Sench. Baft is also the suffix for the Persian verb baften, to knot. It is also a town in the Iranian Kirmam Region, in the center of the  Afshari settlement which collects the Rugs. Baff in Persian means knot: turkbaff, Turkish knot; farsibaff, Persian knot.

Persian city in south-eastern Khorassan, where they began to produce Rugs from the early 900’s.