From Gabbeh to Gujang Rugs 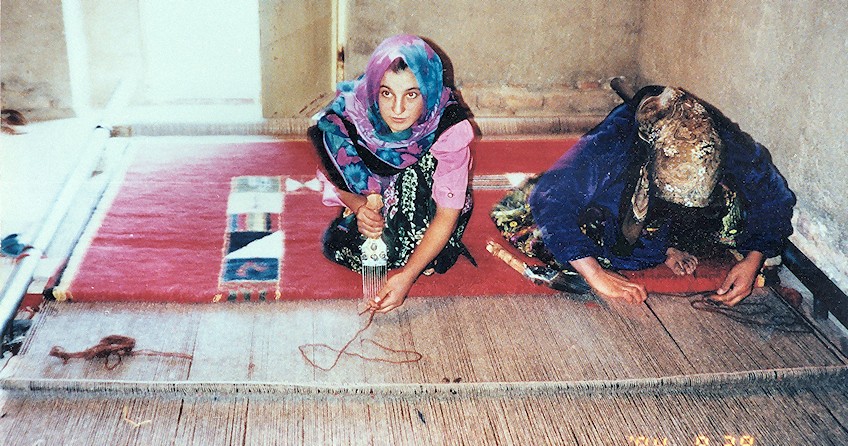 Indian wool rug completely hand knotted. Even the weft and warp are in wool and they are exceptionally strong. The wool is of excellent quality so, only as long as it is brand new it will shed some down, as it is indeed normal for rugs in wool. The subject is modern but very reminiscent of the Persian Gabbeh.

Compared to other normal Gabbeh it has some more qualities: it’s not heavy, has a more shaved fleece, 1 cm only, and fine knotting; in fact  it is soft, light and with a very shiny and bright wool that is an index of good quality. Like the normal Gabbeh they are characterized by bright colours, such as yellow, red and blue, and for the primitive subjects with a rustic charm, based on linear geometric forms that often reproduce figures of stylized animals. The colours are natural, realized according to ancient recipes that use plants and roots as the pomegranate, the root of the madder and indigo. Many seem dyed in an irregular way, a result achieved following the use of colours created by hand.

Quite pleasant type of rug, completely hand knotted in Pakistan. The modern patterns of these rugs have been created in Europe for our Western taste. The warp and weft are made of cotton which makes them exceptionally robust. They fit perfectly in even minimalist furnishings that need heat and dynamic environments like a studio. The good quality wool, the very low shaving, the small knot, the very pleasant subjects and finally the very low price.

The rug in Shag wool with sparse knotting going from three to ten plots between rows of knots and are made almost exclusively by women of the nomadic tribes that populated the southwest of Iran and that were inspired by the surrounding environment. There are also examples, called Shouli, named after the village of fars Shoul Sanger, only knotted with wool in natural colour: ivory, brown and black. Once they were used not only as rugs, but also as mattresses or blankets in tents, in fact they are soft, fluffy and thicker than other Persian rugs (some pieces reach 4 cm thickness). With the hair present on two sides we are talking of Gabbeh Patueh. They are characterized by bright colours, such as yellow, red and blue, and for the rustic charm of the primitive subjects, based on linear geometric forms that often reproduce figures of stylized animals. The colours are natural, realized according to ancient recipes that use plants and roots as the pomegranate, the root of madder, indigo. Many seem dyed in an irregular way but this is the result of the use of colours created by hand. The Kashkuli, like Lori and Bushir are other qualities of Gabbeh Persian which, compared with normal Gabbeh, have a few more gears: they are not heavy, fleece much more shaved (1 cm) and a much denser knotting; In fact, most are soft, light and with a very shiny and bright wool that is index of good quality. The old Gabbeh, knotted in the first half of the ‘900’s have entirely different set of subjects studied and proposed for the West; old Gabbeh are more rustic and tribal, many would say they are childish.

Persian term to identify a dozar, a 200 x 130 cm rug, with fine manufacturing

Gehazi in Persian and Kiz

in Turkish it is so called  the girl who must marry;  even the rugs that she brings with her are called Gehazi, usually small and very finely machined, the term is put in front of the original name as a prefix.

Small rectangular rug, used at the entrance to the tent to stop sand and weeds from entering it, etc.

Fabric artifacts similar to Uzbeck and Turkmen  jijim, often made by sawing the strips until the required measure is reached.

Contemporary manufacturing in natural wool, comparable to Gabbeh Shouli, but with fine knotting. The term “GHIAJ” in Iranian language means natural and this new quality of rugs is natural in all respects. They are produced in a small factory located in a village of Fars using only natural wool and Iranian hemp. They are very light rugs with a very dense and compact knot, a low shave, and the use of hemp (which is not that dry and hard) creates inlaid effects as if they were silk.

From the eighteenth century in Ghiordes, nowadays called Gördes, in western Turkey, were produced, even with a very fine Ghiordes knot, beautiful rugs with a completely woollen structure finely twisted and with the subject mostly  prayer. They have the niche enclosed by a little pimpled frame and a lamp or a floral ornament that comes down from the center of the cusp to illuminate the niche in the empty field surrounded by several small “Sinekli” frames  within two wider floral or geometric frames. Not infrequently there are specimens with a double niche. The current productions are with cotton structure and subjects “Mejid” that are inspired by the French and Persian rugs.

They are very strong kilims weaved by people of Kurdish lineage based in Quchan , in the Khorassan

The Soumak rugs weaved by the Kurds based in Quchan, in the Khorassan.

Artifacts produced in China with modern design  knotted with a cotton structure and, like most of the Chinese rugs, they have very good finishing and are very robust.

We are at your disposal. Contact us or come to visit directly into place.